Status Update 7
So for the past two or three months you may have seen me working on My C# Networking series, but for the past couple of weeks I've had to take a little bit of a break from it. The first reason why is that I have a few other important things in my life that I need to take care of right now. The second is that I actually want to take some time off and focus on a few other smaller things.

One of those "smaller things," is this final project I worked on for my Computational Geometry class a year and a half ago; I wanted to release it publicly. My goal was to make "A teaching tool for other students to learn the Monotone Polygon Triangulation algorithm." The old version was buggy, but I finally got around to cleaning it up. If you want to play with it, you can find it here: https://16bpp.net/page/monotone-polygon-triangulation (source code is available too on GitLab).

While I've been underway working on the C# Networking tutorial series I've been doing quite a few site updates.  It's given me a chance to add some Dart code to the site and I've decided to share some of the little playthings that I make with it.  You can find them over here.  It's not supposed to be a rational tutorial/walkthrough; nothing builds upon itself.  They are one-shot samples.  I don't plan on regularly updating it, just when I want to.

I've been a little bored while waiting for the parts and tools to come in for my January project. After playing Fez and trying out the stereoscopy mode, I decided to pass the time by trying to add the feature to my 3D cube.

Stereoscopy works by creating two cameras, one for the right eye and one for the left. These two cameras are a small distance apart. Each of them will see a slight different image/projection of the 3D objects. An image from anSGI tutorial written by Paul Bourke gives a great visualization:

There are multiple ways to view the right and left images. Probably the most common is the use of red and cyan filters. Though systems like the RealD 3D use polarized light to achieve this effect. The first method has significant color quality loss on images, where as the later has much less loss. The reason why the first method is much more prevalent is that it is much cheaper and easier to do. E.g., it doesn't require any extra equipment (sans the glasses) and is not to difficult to implement. Systems like Nintendo's 3DS use a phenomenon known as Autosteroscopy that doesn't require glasses, this is achieved by having Lenticular Lenses applied to the display. It's pretty nifty, and the quality isn't too bad, but there is there are the slight problems that it is more expensive and the viewer need to be in a “sweet spot,” to see the 3D image.

I decided to go with the red/cyan image method. In the current state of my 3D cube program, I don't have anything complicated like cameras added in, so to get this working I did this:

It's definitely an improper method, NEVER DO THIS, but it does give off the effect. I updated the repo page in case you want to view the source. Just change the variable renderStereo to be true.

Below is the stereo-scoped 3D cube (as JavaScript) 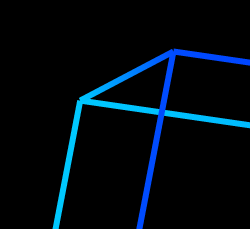