About two weeks ago, I decided to revisit Random Art once more. This time around, I wanted to put it in a browser, so I made a WebGL port. You can write equations in a scheme-like syntax, or generate your own. I was going to use Nim at first, but I opted to try out TypeScript instead. I've heard about this new JavaScript replacement language for quite a bit and I thought it was time to give it a go. It's not bad IMO, but I'm not ready yet to fully commit to it.

In other news, about a month ago I started a daily Japanese practice blog (毎日日本語練習ブログ). I call it 日本語ベン強 (nihongo-benkyou). It's a pun; you won't get it unless you know some of the language. Since February of 2018, I've started taking Japanese classes. Foreign languages have always been an affinity of mine, and I was looking for a new hobby that's not related to tech. I created the blog so I could get some practice writing Japanese. Even if it's not the most correct. So far it's been fun.

Tags: Art, Procedural Generation, Status Update, TypeScript
Status Update 8
So it's been quite a bit since I last did an update. A few months short of two years to be exact. I've been fairly busy with work and some other long term personal projects. But in the meantime, I did get to release a much smaller one; Basson, a cross platform audio playback engine for C#/.NET Core:
https://gitlab.com/define-private-public/Bassoon

I created this since I wanted to be able to do audio playback in C# on Linux, Windows, and OS X. While there were some packages available on NuGet, they were not preferable to me, so I took the time to make my own. It's hobbled together using P/Invoke bindings to `libsndfile` and PortAudio. At the moment it does not support MP3 decoding (though that is planned), which is one of the main drawbacks. And you also need to build the native dependencies yourself, but a CMake file is provided to handle that. In the future, I hope to also add some more features such as audio recording and some minor effects. So far I am happy with it.
Tags: C#, Status Update, Projects
Status Update 7
So for the past two or three months you may have seen me working on My C# Networking series, but for the past couple of weeks I've had to take a little bit of a break from it. The first reason why is that I have a few other important things in my life that I need to take care of right now. The second is that I actually want to take some time off and focus on a few other smaller things.

One of those "smaller things," is this final project I worked on for my Computational Geometry class a year and a half ago; I wanted to release it publicly. My goal was to make "A teaching tool for other students to learn the Monotone Polygon Triangulation algorithm." The old version was buggy, but I finally got around to cleaning it up. If you want to play with it, you can find it here: https://16bpp.net/page/monotone-polygon-triangulation (source code is available too on GitLab).
Tags: Dart, Computer Graphics, Computational Geometry, Status Update
Status Update 6

It's been almost a year since I posted something.

The post important thing is that I've graduated from RIT, with a B.S. in Computer Science. It was a very good program and let me meet some great people.

Second, I had to put work on Blit on hiatus due to an employment agreement that I had last year. I had a 400 day streak going on the last day, which was pretty cool. Even though I could have started to work on it again a few months ago, I chose to pursue some other projects I wanted to get out of my head. I'll figure out the future of Blit soon enough.

I was planning on doing another post after Imagine RIT, but I've been pretty busy. I was able to display off MEGA_MATRIX there along with a small fork of Blit where you can create animations then upload them to the device. It's was pretty popular with the kids. I'll be posting some of the creations soon enough.

Speaking of Blit I have been still working on it daily since the first release back in February. The big thing that I had to do was refactor the underlying monolithic Animation module into a more flexible and reusable system.

I've also done a few other things like add a shape tool, line tool, fill tool (you know, the basics), and a few icons. There are many other features that I want to add too like exporting to GIF and video files. I think I'll be able to get them done for P-2. 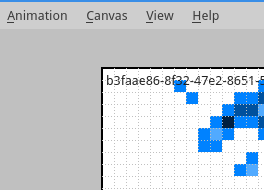