Let's first talk about how our clients and server are going to pass around messages/packets.  To make this more structured than last time, we will be using JSON, which will only contain plaintext.  Each JSON object will only have two fields, command and message.

We have only three simple commands for each type of packet:

If you're a little confused, here's a diagram of how our apps will operate: 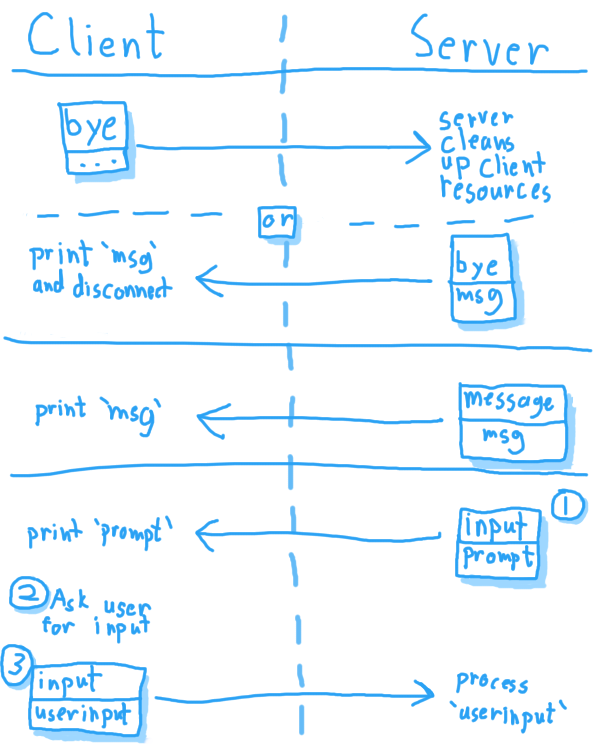 Here is our Packet class.  ne sure to add it to both projects in your solution.  The main reason we have this is so we can access the data in a more C# like way.  We will be using Newtonsoft's Json.NET library for parsing.

How it will be sent over the network

Before we go and shove the Packet into the internet tubes there is a little pre-processing that needs to be done first:

That final byte array that we have is what will be sent over the network.  This way whoever receives a Packet knows how long it is.

You might be wondering why we have to do this.  Here's the thing, TcpClient.Available will report how many bytes have been received but not read yet, and only that.   There is the possibility that two Packets may have been received before our app has had a chance to read from the NetworkStream.  This poses the question of how we will pull out the data into two separate Packets.

Since we are using JSON, we could match first level curly brackets.  Instead, stuffing the length of the "true message," right before the actual message is a common technique that is used, and thus it's best that we practice that here.

I chose to use unsigned an unsigned 16 bit integer because it lets us have JSON strings that are almost 64 KB long; that's plenty of data for text based games.  We could use just an 8 bit unsigned integer too but that will only give us 255 bytes max, so our messages we send would have to be quite tiny.