Fractals have been something that I've found really intriguing since high school, though, I've never taken too much of a stab at trying to generate them.  For a few assignments back in my CS1 class we had to use Python and the Turtle package to draw some.  These were done mainly to teach the concepts of recursion, state, and using geometry in computer programs; pretty basic stuff.  I imagine that almost everyone has had to use Turtle at some point in their CS coursework, and incidentally, has drawn a fractal.

Last year I was taking a course in Global Illumination.  We had to do two projects over the semester.  Write a ray tracer (throughout the weeks) and explore a graphics related topic of your choosing.  For that second one, some students chose to look into ray marching or real time raytracing.  I wanted to look at fractals some more.

After talking with one of my friends, he told me to look up something called "L-Systems."  The full name is "Lindenmayer System," and it's the magic behind fractal generation.  In a nutshell, the idea behind it is to create a grammar (yeah, one of the CS theory ones) and give each letter (or variable) an action (e.g. "draw line forward 10 units," or "rotate 45 degrees clockwise,").  The simplest example I can think of is the Cantor Set on the L-System wiki page.

Even though I was already making a 3D graphics program for the class, I decided writing a Blender script would be the best.  Here are some of my reasons why:

So working in Blender there isn't a 3D Turtle object you can rely on to do the drawing.  But instead, you have to work with Matrices.  The basic idea of what you need to do is this:

If you're still a little bit confused, take a look at the git repo over here.  All of the necessary code is in l-system_tree.py.  It's pretty simple and you should be able to follow along.  My L-System grammar is quite uncomplicated:

"A," also means "draw a branch," whereas "B," "C," "D," and "E," mean rotate about an axis (each one is different).  Each variable also checks the current depth to make sure that it isn't going on forever, though only "A," really needs to check for that.

There are a few other configuration options that I threw in (e.g. TWIST) so I could make some different looking trees.  Below is an example of one of the trees that I made with VARIATION_MODE turned on; it gives the tree a much more natural looking feel. 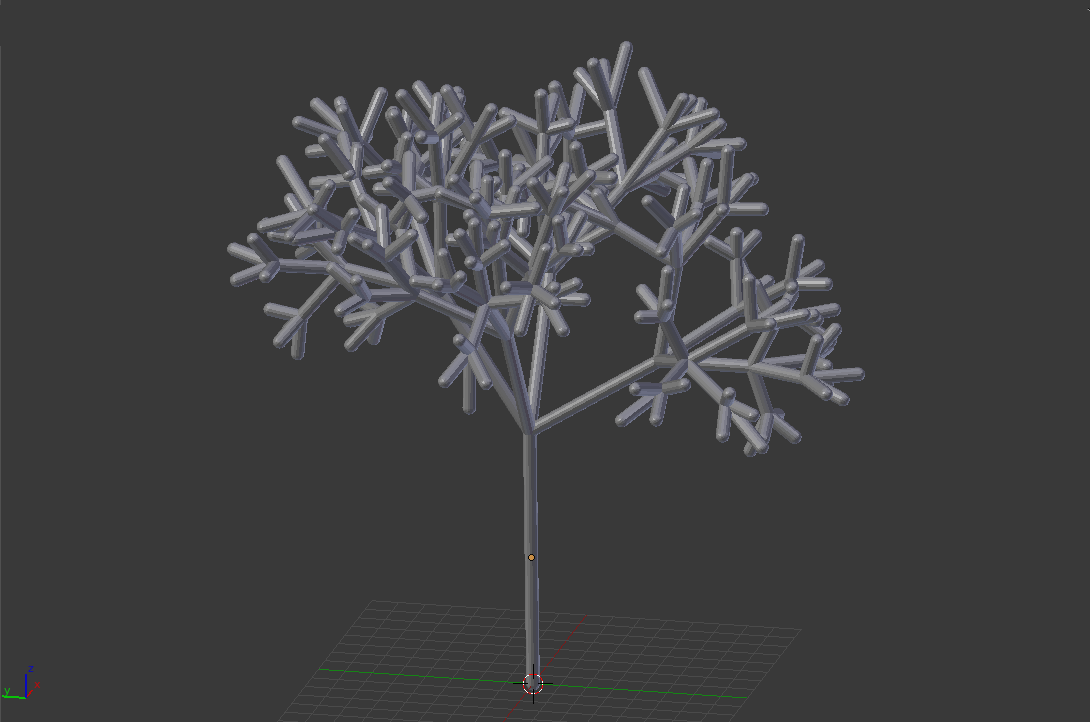 Blit, A Retrospective On My Largest Project Ever