If you want to go ahead and skip to the game I made, it's over here.

About 4+ years ago I heard about a new(-ish) game engine called Godot. I thought that it was kinda neat to have another open source one around, but I didn't think too much of it. In the past few years I'd hear about it again from time to time (e.g. when it gained C# support, making it a Unity contender). I was kind of interested in making something with it, but at the time I had no ideas.

Recently, I thought "It has sure been a while since I worked on a personal (technical) project. Not to mention a video game. I'm kinda itching to try out that there Godot thingy...". So about two-ish months ago, I decided to build something with this engine. Thinking about what could be small, short, but good enough to get my feet wet, I settled on reimplementing my Linux Game Jam 2017 entry Pucker Up.

Lemme take a brief aside to tell you about Pucker Up. As stated before, it was for a jam. My first Jam in fact. At that time, I was a bit more into tinkering with the Nim language. I kinda wanted to be a bit more HARDCORE™ with my approach in the jam. Luckily the only restriction was "Make a game that runs on Linux". No theme whatsoever; quite nice. We had 72 hours to finish and submit it. Then it would be live streamed by the jam creator.

I originally planned out a much more complex game (i.e. what was a tower defence). Then being HARDCORE™ I set out to grab some GLFW bindings, write my own game engine/framework, graphics/shaders, physics, etc. At the end of the first day, I realized how much of a difficult decision that I had made. All I got done were the initial windowing and input management, being able to draw flat coloured debug circles, and circle intersection algorithms; it was absolutely piddly. Realizing the pickle I had put myself into, I reevaluated what I could do with the toolkit I had made from scratch. I threw out my 99% of my original idea. Thinking instead about some sort of arcade-like game. The result was a sort of Pong with the goal in the center, where you had to keep the puck out of it. The QWOP control scheme happened by accident (I swear). Turned out it was kind of fun.

After the Jam was over, leveraging Nim's compile to JS feature, I was actually able to make a web browser playable version of the game in a short amount of time. I didn't have to force users to download a sketchy executable which was nice. That took me about two weeks since I needed to also add some extra Nim to JS/HTML5 bindings and work out a few kinks and bug or two. But it actually was quite simple. (Speaking about Nim, it also has some Godot bindings too.)

I've been looking at that JS/HTML5 version of Pucker Up for the two-ish years, discovered some bugs here and there, I thought it would be best to give it a little refresh. So instead of trying to wracking my brain to think up a new game, I settled on renewing something old I had.

Back to Godot-land. What I would say that originally drew me to the engine is it seemed like a nice professional project that was very liberal with it's licensing and it is openly developed. Linux being a first class citizen for the project is very sweet too. I tried out the Unreal engine on Linux and wasn't too happy with it. I've also had some serious issues with playing Unity made games on Linux.

I'm a person who has probably made more game engines than games. I don't know why this has been the case for me, but it just has. Maybe it's that feeling of being closer to what's going on in the whole program, or rather knowing 100% how something was made. Looking at the source for Godot (and the docs, which has A+ tutorials), I appreciate how easy and hackable this engine is. And to boot, the community is quite friendly. 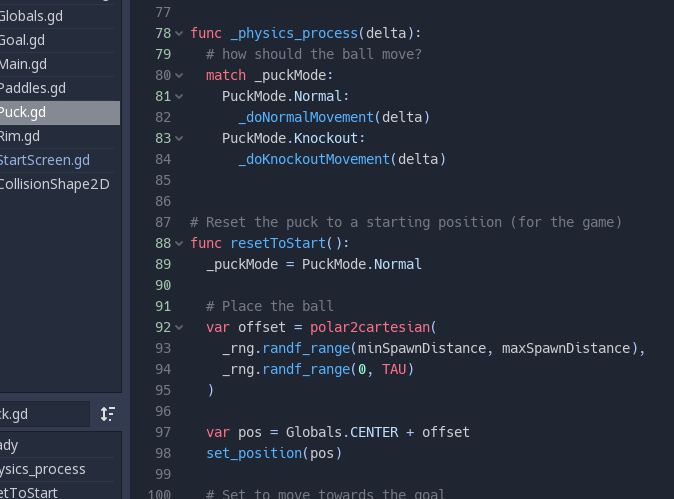 I originally wanted to make my game in C#, as I prefer the more structured languages. I soon found out that it was a no-go for me. My desire is to target the Web as my main platform. As of writing this blog post, C# only has desktop support. Therefore, I would have to use Godot's built in language GDScript. I wasn't too adversed to trying it out. It had a very Pythonic feel to it. This also helps too if I want to bring Pucker Up to any Android or iOS platform. It definitely feels a little odd a times. In the sense that I feel that I'm writing Python code, but some of the APIs are completely different. I also miss the safety of explicitly typed languages. They offer some more preflight checks. Godot has some (Python is even worse), yet I am not completely satisfied. In the future, if I make a serious Desktop game, I'm going to use C#. But for jams and any non-Desktop platforms, I'll reluctantly use GDScript. I really don't like writing JavaScript though I want to target the web, so I'm willing to make this small compromise. 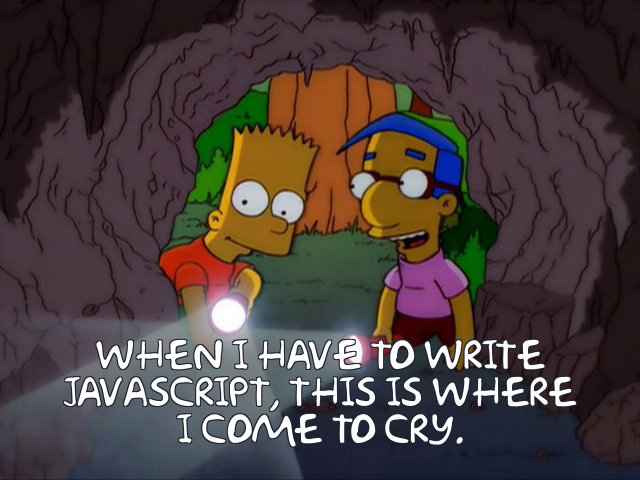 The tutorial section of the Docs are quite good, but the API docs don't feel like they are fully here right now. For example if you look at much of Microsoft's C# docs, many methods usually have an accompanying example with them. This isn't always the case with Godot. For instance, to spruce up Pucker Up, I wanted to add some directional sound. Doing some googling I was led to the docs for AudioEffectPanner. Looking through, it's super sparse, and doesn't have a simple example of how it can be used. Not nice.

The main draw of using any engine is "Look at all the stuff we provide for you." When I started make games, it mostly was only a set of APIs. Tooling was something you had to do on your own. Godot provides a pretty nice editor (UI, level, animation, etc...), but it does take some learning.

I'm also a pretty big fan of Animation (go look through some of my other posts to see). The builtin framework for Animation that Godot provides I think is nice, but the editor isn't the most intuitive. I've used programs such as Flash (R.I.P.), Moho, Clip Studio Paint, and even Unity. They were always pretty easy to get started with. In Godot, I had some trouble figuring out how to key properties. I didn't know what kind of interpolation I was initially using. And the curves editor was difficult when it came to zooming it's viewport(.e.g I needed to work on a value in the range of [0.0, 1.0], it was a bit of a struggle). One of the other things that drove me nuts: If you didn't reset the playback head to `0` before running your game, the animation would start where the head was left in the editor. I can see how this is handy for Animations that are longer (.e.g 5+ seconds). Though if you notice in video games, many actions/effects are on the quick side (e.g. 1/4 of a second). When you're doing this, you tend to what to see the whole thing. I will admit that my digital animation experience it a bit lacking (I think I've spend more hours with a pencil and paper than with a Wacom tablet), but some stuff didn't feel that natural. I also ran into a bug: when tabbing through options to adjust properties, sometimes the editor would freeze. Not fun. 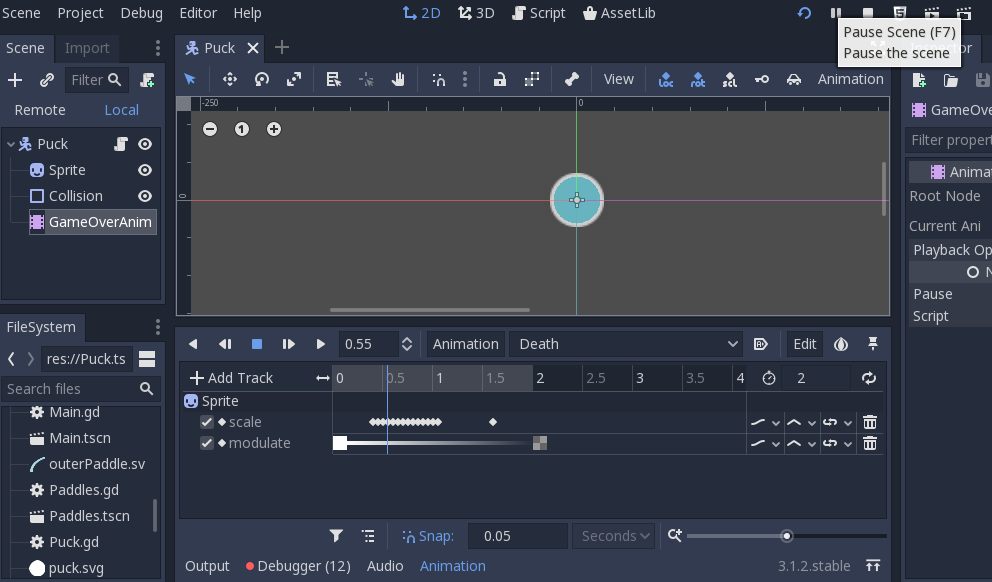 Godot also has a minimal UI framework is built in. Adding custom skinning can be quite the hassle though. A CSS like way to skin the UI would be wonderful (which is that the Qt and Gtk frameworks already do). This might be a time sink for the engine (and would add much extra complexity) for what is only a minor feature. I can dream though...

After about two-ish months of work, I had a more sophisticated version of Pucker Up ready. I had some extra animations, more sound variation, smoother movement, improved score reporting; I could go on for a while. Without Godot, these would have taken much longer. There was one last hurdle to overcome: Exporting to HTML5. I was hoping for this to be a few clicks and done, but it wasn't quite that easy. Retrieving the HTML5 export was simple enough. IIRC, there was a one-click download button. Export prep was a breeze too. The issue arose when I then went to run the game in my browser. When I loaded up the game.html file in my browser, the scaling and placement of my assets were not where I expected them to be. Even across browsers (and different machines) it all appeared vastly different. I got some of my other friends to help me test this out. I did file a ticket on the Godot issue tracker about my problem. I also asked the Godot Reddit community for their experiences with targeting HTML5. From there, someone was able to suggest I tinker with the "Stretch" settings for the project. Voila! It gave me the result that I wanted and order was fully restored. This was quite the frustrating experience and I think it could be remedied by mentioning these "Stretch" settings in the "Exporting for the Web" doc page.

I've also noticed that the performance of Pucker Up is much smoother in Chrome(ium) than in Firefox. That isn't good. The later browser has some semi-choppy movement of the puck (and high speeds), and the sound effects (such as the bounces) weren't playing at the exact moment that they should. They were off by a few milliseconds. While this doesn't grandly impact the game (as it's still playable), I don't like having to add a "Plays slightly better on Chrome based browsers." footnote to my game page.

All in all, it may seem that I'm be a little extra critical of Godot here, but in earnest it's been a very pleasant experience (re)making Pucker Up with it. With were it stands right now, things can only get better with the framework as time goes on. I'm looking forward to the next game jam I'll enter because I'm sure enough to use this tool. Or maybe I go on with a more grand idea. Godot only knows. :P

You can find the Godot version of Pucker Up over here. Please enjoy.

Native Library Management for C# using vcpkg (and other things)